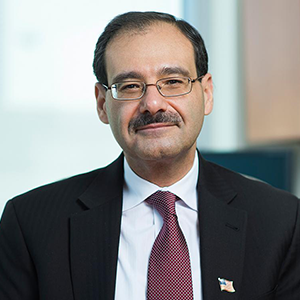 Yosry A. Barsoum is vice president and director of the Homeland Security Systems Engineering and Development Institute (HSSEDI) at The MITRE Corporation. HSSEDI is the federally funded research and development center (FFRDC) that MITRE manages for the Department of Homeland Security (DHS). The HSSEDI provides systems engineering and technology expertise that supports DHS acquisition strategy and improved capabilities to ensure the nation’s security. As vice president and director, Barsoum provides strategic business direction and leads operations and resource management.

Barsoum, who joined MITRE in 1990, has been recognized for his technical and management leadership internally and externally. His work spans a range of technical areas including modeling and simulation; communications and networking; and command, control, communications, computers, intelligence, surveillance, and reconnaissance (C4ISR).

Barsoum previously led MITRE’s support to the Office of the Secretary of Defense. In that capacity, he was responsible for MITRE’s work with the Department of Defense (DoD) chief information officer; the undersecretary of acquisitions, technology, and logistics; and several other organizations. He also served as director of integration for tactical networks in the National Security Engineering Center (NSEC), the FFRDC that MITRE manages for the DoD. Barsoum was responsible for a range of communications and network programs including the joint tactical radio system, the warrior information tactical network, and various network integration experiments.

Prior to that, Barsoum was associate executive director and chief engineer for the Army Programs Directorate in NSEC. As chief engineer, he was responsible for setting the technical agenda by identifying and resolving critical technical issues that cut across MITRE’s Army work program, strengthening the engagement in cross-cutting system of systems engineering activities, and creating and maintaining a vibrant technology program aligned with Army business goals and MITRE’s corporate strategy.

Prior to joining MITRE, Barsoum worked for RCA Global Communications and MCI Telecommunications as a hardware and software network designer.

He holds bachelor’s and master’s degrees in electrical engineering from the Stevens Institute of Technology. He also holds an executive master’s degree in business administration from Rutgers University.